Thank you for reading Champ’s story! 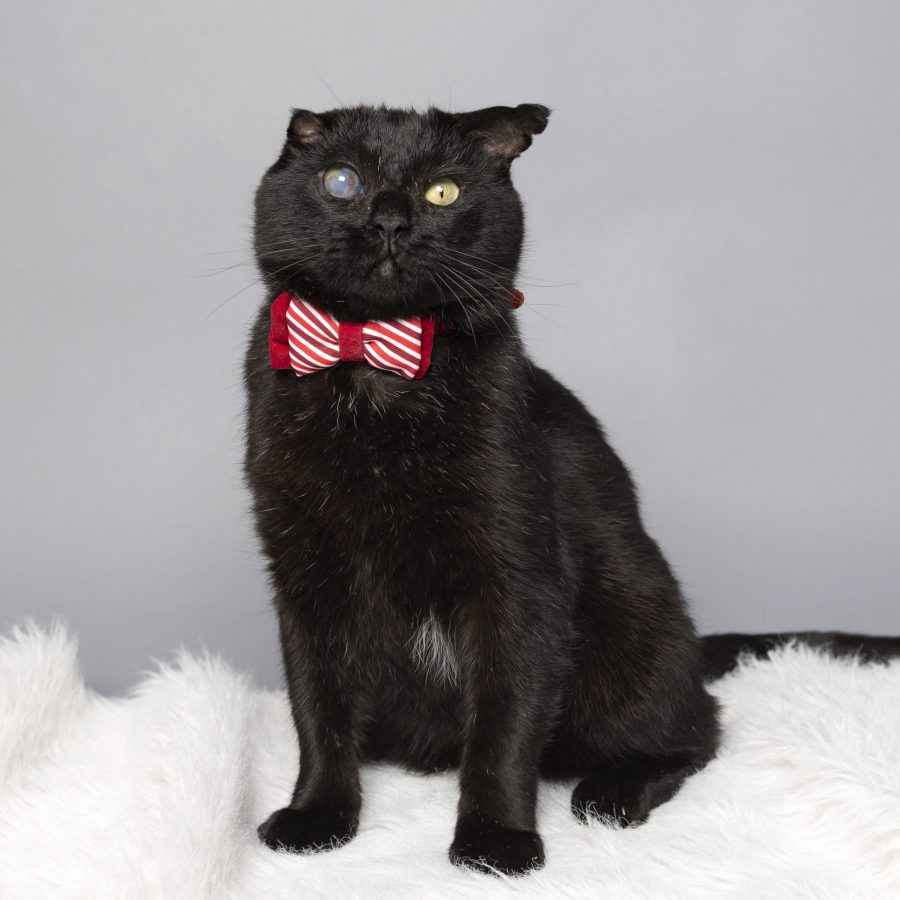 Champ’s first Christmas in his forever home was one for the books. While he wasn’t particularly interested in the Christmas tree, he sure was interested in the gifts Santa brought him. You see, Champ made the nice list. Unlike some of his siblings, Champ never begs for human food or jumps on the counter. He always uses the litter box and even steps in to help bury when the other cats seem to forget how to do that. For Christmas Champ got a new kicker, crinkle balls, and a tunnel addition! He loves to flip his crinkle balls in the air, sprint to his tunnel, and then come back to his crinkle ball and bat it all while singing the song of his people.

The past is in the past and Champ isn’t looking back! 2020 will be a year filled with lots and lots of love and friendship. Champ is heading into the new year with his brother from another mother and BFF, Roo. In a house full of ladies, a fat lazy cat, and a senior kitty; Roo has been anxiously waiting for a brother to wrestle. We often find them in a stand-off that results in kitty tumbles, sprints, and more tumbles. Then about 10 minutes later, they’ll be snuggled up together in their favorite sun spot. Roo took Champ under his wing the moment he met him and has helped Champ grow into the confident and charismatic cat that he is today.

If you haven’t already, I encourage you to make a donation to help the cause. With your help, Forgotten Cats can make a difference.

I’m honored and proud to share with you a bit more about his journey and how he is doing today. Before I jump in and start telling you just how amazing Champ is doing, I need to tell you that without Forgotten Cats, Champ wouldn’t be here today. I am forever grateful for their commitment, dedication, and compassion towards any and all cats that enter their doors.

From the very beginning, I knew in my heart that if Champ survived this, he was never leaving our home. We have fostered many cats for Forgotten Cats over the years-but our bond with Champ was different. We poured every ounce of ourselves into his care. Gosh, we loved this cat from the second we brought him home. Fear and sadness were our biggest feelings initially. How could someone do this to him? This sweet, innocent baby. And then we would endlessly worry whether or not he’d survive.

Well, not only did he survive but he is absolutely thriving. Champ has a few kitty siblings and he loves spending time with them. From the second they met him, they all immediately accepted him (even the blind one who is normally a little hesitant at first). It’s as if they knew he was special and needed love. He is particularly bonded to one of our cats, Roo. They’re quite inseparable and love to wrestle. In our next Champ installment, I’ll talk more about their special bromance.

Just like any other typical cat, Champ spends the majority of the day sleeping. When he is awake, he loves to play! His favorite toys are his kickers which he wraps his body around and kicks like a crazy kitty. Champ sleeps in bed with us most nights and is often snuggling up with me on the couch. He loves kisses on his “baby ear” and even nudges me for more. He makes the best biscuits in town and you can hear his purr from a mile away. While I would like to think his favorite pastime is snuggling with his mama; I think that if you were to ask Champ, he’d say his favorite time of the day is meal time! He even stands on his hind feet and dances for his food.

From his outward appearance, we can see the scars of his past. Champ walks with a heavy limp but that doesn’t stop him from jumping, running, and living his kitty life to the fullest! He receives a daily supplement to help with the prevention of arthritis. The ophthalmologist believes he is blind in his right eye and down the road there is a risk of glaucoma. His baby ear is prone to infection and requires weekly cleanings.

From day one, we could feel the gratitude radiate off of Champ and that hasn’t changed. Champ has overcome so many obstacles and trusts so freely despite his past. Because of Forgotten Cats, Champ has a second chance at life. And I promise you, he’s enjoying every second of it!

Tune in to our website every few days for a new Champ update!