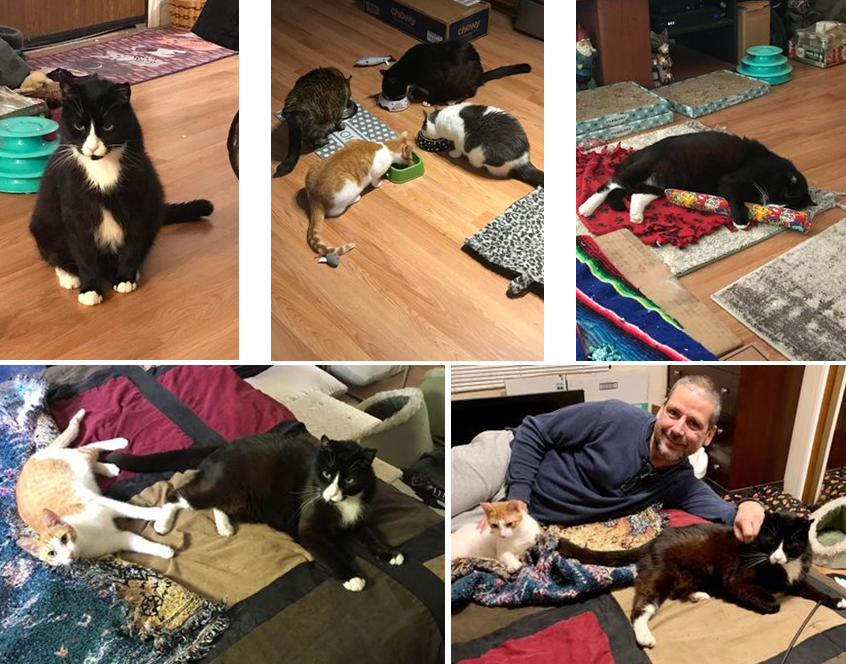 Happy Endings!!! In April, we posted about needing to find a home for Helsing, a special needs kitty. We recently received an update from Helsing’s new family . . .

‘Hi. My wife and I adopted Helsing back in April. He is a diabetic older kitty. We are happy to announce that we have his blood glucose stabilized in the 100s and have been able to cut his insulin to a 1/2 unit, twice a day. Our vet is hopeful that we may even get him into remission. We promised an update on this fellow, so here it is. We are so happy to have him in our home. He is a perfect gentleman in his little tuxedo.

Helsing has been a perfect patient. He takes his shots like a champion and is close to being in remission. He is our 2nd diabetic old man kitty. We adopted him after his predecessor passed away in January. Our home will probably always have an old diabetic cat in it, as we have found that they are so appreciative of the care they receive.

That picture (below) is of him and his little buddy Rufus. He was also a Forgotten Cat that we adopted in January.

We are so happy to have him in our home. They’re both well loved.’

“Hello, I would like to give you guys at Forgotten Cats an update on Daisy (now known as Toffee) who we adopted three weeks ago from the Petsmart in Brandywine Town Center (DE). She is such a wonderful kitty and she is fitting very well into our family. It took a bit of time, but both of our cats have warmed up to her as well as our dog! She is very playful, confident, and likes to meow loudly at me for dinner and breakfast. She is the first cat I have had that actually likes belly rubs!”

Happy Endings!!! “Here’s an update on Bobby Ray, now Monty, exactly 1 year later! He’s still the sweetest cuddle-monster you ever met. He likes catching toys and running off with them, and loves to snuggle down in bed at night. He STILL sticks his tongue out on a regular basis. It’s a feature! We are so happy he’s got his forever home with us. ❤️”

Happy Endings!!! Skye, formerly Uma Purrman, was recently adopted. Her new family shares, “I just wanted to reach out and tell you how happy our family has been with Skye 🙂 she is such a sweet little girl who purrs all day long and loves pets and attention. She sleeps above my head at night and makes biscuits on our chests 😍❤️ we can’t imagine our home without her!”

Happy Endings!!! Sometimes a cat finds her forever home in a way that can only be described as destiny. Hazel is a shy girl who was staying at our adoption center in Jenkintown, but didn’t seem happy there so we were just getting ready to take her back into foster care when the perfect human found her. Here’s an update!

“I want to thank you again for helping me take Hazel (Masha) home with me. She has truly been a pure blessing in my life.

A month before I actually adopted Hazel, now Masha, I found her on Petfinder. The second I saw her, I knew that she was the cat for me. I kept on looking to see if there were any cats closer to me in any shelters but I always ended up finding my way back to Masha. She was the only one in my favorites on the website. One weekend, I came home and it was just by chance that I went into PetSmart. While there, I decided to check out the cats for adoption and there was Masha! I couldn’t believe it. I had no idea that she was there, I didn’t know she was out of her foster home. It was just by chance that I was home that weekend, it was just by chance that I went into PetSmart, and I would later find out that Masha had only been at the center for a few days after leaving her foster home.

I’ve had her for a little more than a month now. And the timid, scared kitten that I had brought home that was too terrified to take a single step while I was awake has blossomed into a curious, playful and loving addition to the family. She is by my side anytime I’m studying, circles around constantly to be pet and sleeps next to me every night.

I’m so happy to have been able to adopt and give this angel a home.”

Dalton came to us from Forgotten Cats 10 weeks ago.

Dalton came to us from Philly. He was very shy when we first met him, and we were told he was a jumper which on the first day he came home with us he decided he wanted to be included with our grandkids pictures as well which below is a picture of him less than 2 hours of coming home with us.

I could not get over how big of a cat he was. As I was looking at other cats that they shown me at the pet store this cat kept standing out.

No, he was not a kitten which I first wanted, and yes he loves to jump which I was hesitant on wanting this but I thought why not take chance on this older cat.

We are so glad we did! He adjusted very well to the family and truly is living the good life now. I’m so glad we took a chance on this big guy. He is so loveable and the cutest cat he possible can be. Thanks, Forgotten Cats for rescuing him. 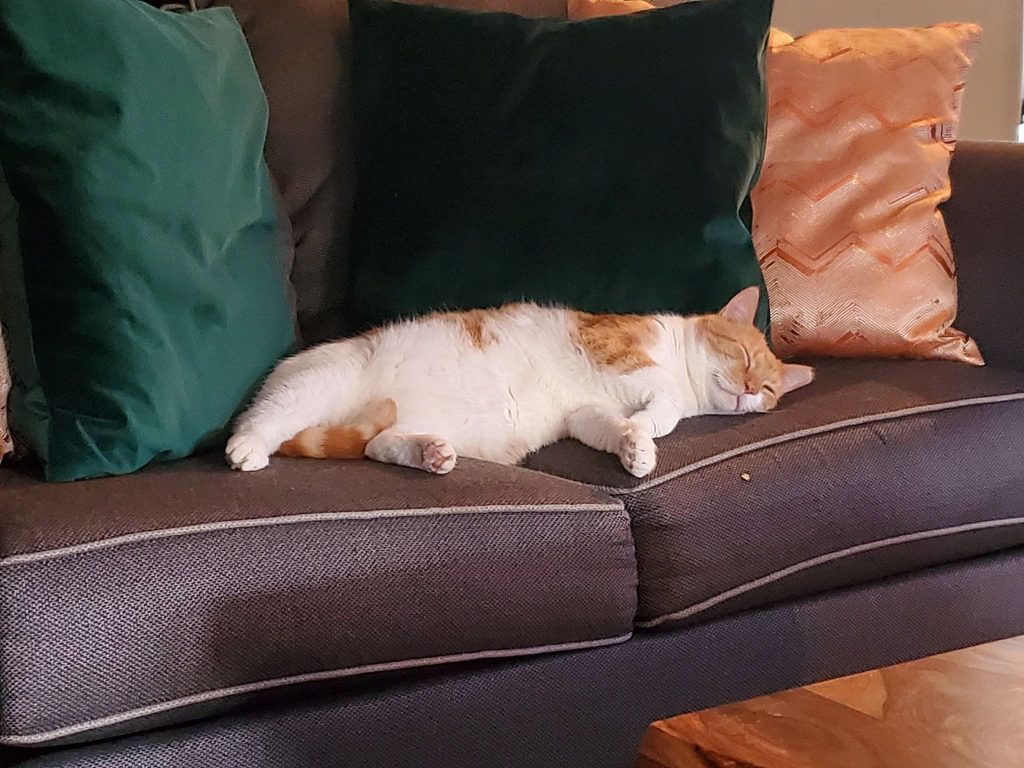 Happy Endings!!! Squeaks came from a feral colony in Sussex County, DE, a site where unwanted cats are often dumped. He was already neutered when we found him, and was found to have both FIV and cerebellar hyperplasia. CH affects a kitty’s sense of balance and while the condition is manageable and not life-threatening, it can be much harder for cats with the condition to find a home. It can be even harder for a cat who also has FIV, which is a manageable but highly stigmatized condition. Luckily for Squeaks, the perfect family came along a few months ago. They already had 2 cats, one of whom also has CH and is deaf, and they were ready and willing to provide a safe home for another cat with special needs.

Now Squeaks is living the good life in his forever home. He was renamed Frito. His new dad shares, “he will never know what it is like to be cold or hungry or unloved ever again!” We can tell how happy he is and we’re so happy for him. Congratulations to Frito and his forever family!

Happy Endings!!! Many of you have been asking for an update on Batman. For those who don’t know his story, Batman is a senior cat with special needs who was stolen from Brookhaven PetSmart in November. After weeks of desperate searching by cat lovers and the police, and a whole lot of media attention, someone tipped the police when they saw the alleged perpetrators. Thanks to the incredible work of the tipsters, the Brookhaven police and the community, Batman was recovered safe and the perpetrators were arrested. We do not know why they stole Batman, but we are over the moon that he was found safe. And to make the story even happier, a week after being found, Batman was adopted by the very same people who gave the tip to the police!

Batman’s new family shares, “Batman is doing amazing! He’s the king of our house already- pampered and spoiled 😜 He literally follows us around 24-7 and we LOVE it!! He’s really happy with us and it makes our hearts full ❤️ He has already met our family and friends and you can tell that he thrives with the attention from everyone lol. He’s sooo social!! When people come over, he greets them with with a little “hello” meow.”

What a happy ending. We love you, Batman!

As you may remember, Batman was stolen from our adoption center in the Brookhaven, PA PetSmart. Following an agonizing 8 day search, our sweet cat was found safe by the Brookhaven Police Dept. (based off a tip from his future adoptive mama!). Shortly after his recovery, Batman was adopted into a wonderful home. Nearly 6 months later, here’s what his new mom has to say:

“Batman is amazing! He follows us around 24-7 and we love it! ❤️❤️❤️ We couldn’t ask for a more affectionate and loving cat. He adapted right away. It’s only been a few months of him living with us, but it feels likes he has always been here. He has a toy box of everything you can imagine, but he prefers to play with strings on clothing, door jams and area rugs 🤣 If he’s not sleeping with us, he is sleeping on the recliner. Little guy loves his comfort.

Batman is great with visitors. He loves the attention that he gets, and is wonderful with children. The other day family came to drop something off, but due to the quarantine we just talked through the glass door. Poor Batty (his nickname) wanted to see them so bad that he was crying for us to open the door, and then he kept reaching up trying to open it.

His health is good! He just had a vet appointment and his kidney issues are still really low. He’s frisky, chatty, full of energy and loves to give kisses! Right now, he is in his glory because my husband is working from home. Each day he makes an appearance on his video conference calls. He’s famous with his co-workers now because of that. People are always asking him about Batman.”

A BIG thank you to the Brookhaven Police Dept. and EVERYONE who helped in the search for Batman🙏